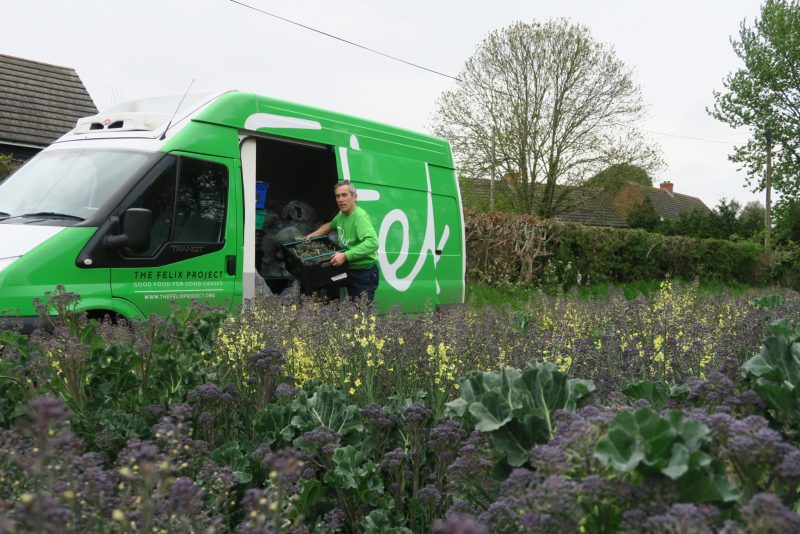 The Felix Project had been hearing the whispers from Feedback and the gleaning network for a few weeks, rumours of a possible treasure trove of food being made available at a farm in deepest Kent.

Then, on Wednesday, it was confirmed… it was on! All systems go, social networks were set ablaze with shouts out for volunteer pickers, pluckers and anyone with green fingers and a desire to do some good, to save some valuable produce and to share it to those most in need.

As the message evolved it became apparent that in, the space of a few days, a field of cauliflowers that had our name on it had a different plan. The caulis decided they preferred bees to people armed with machetes and went ahead and flowered, stopping us in our tracks.

So we were told that we would move to plan B, less vehicles were needed but our mission would now be to rescue nutritious brassicas and potatoes which could not make it to market and would otherwise be wasted. These delicious greens were being wasted because recent warm weather sped up the growth cycle making the farm unable to harvest and sell them in time before they flowered and spoiled. The potatoes were food waste as they were too big or too small for commercial market.

Volunteering to stop food waste
Many volunteers at the Felix project who had dearly wanted to be involved in the day’s activities could not make it at such short notice. So in future we will endeavour to prepare a mailing list of anyone who wants to take part so that we can be better prepared and ready to react when news of more bounty arrives.

Damien and Sharon from the Felix project drove down to Boundary Farm in the garden of England’s most easterly extremes.

Winding down country lanes past quaint villages, blossoming fruit trees and naked hop posts looming like gallows against the brooding sky. they reached the farm and met Carrie and the team of volunteers and set to work picking the budding tender stems of purple flowering broccoli that was hip deep and soaked in recent rain. This was a race against time as this field and the delicious food in it would otherwise go to waste.

After a couple of hours the field and the broccoli was sadly abandoned as they moved on to a short repast and set to work sorting and bagging potatoes and cutting a field of spring greens.

Sharing is caring
The vegetables were then driven back to the Felix depot in Enfield, where they were stored in a chiller ready for delivery to frontline charities who supply food to marginalised, vulnerable people facing food poverty and struggling to survive.

The projects being supplied with the days harvest include homeless hostels, community kitchens, women’s refuge centres, services for the elderly, foodbanks and schools in deprived areas. They will be flooded with delicious nutritious food that’s fresh from farm to fork. Sharon who volunteered on the day runs the cooking and nutrition project at Only Connect a criminal justice charity that is supplied with surplus food by the Felix project.

Food waste scandal
The day highlighted the plight of our farmers and the scandalous waste of good food, but also showed what a force for good the Gleaning network really is. The Felix volunteers returned tired but happy from a really uplifting day, one that showed that when like-minded people work together they can really make a difference.