World Hunger Day event at the House of Commons 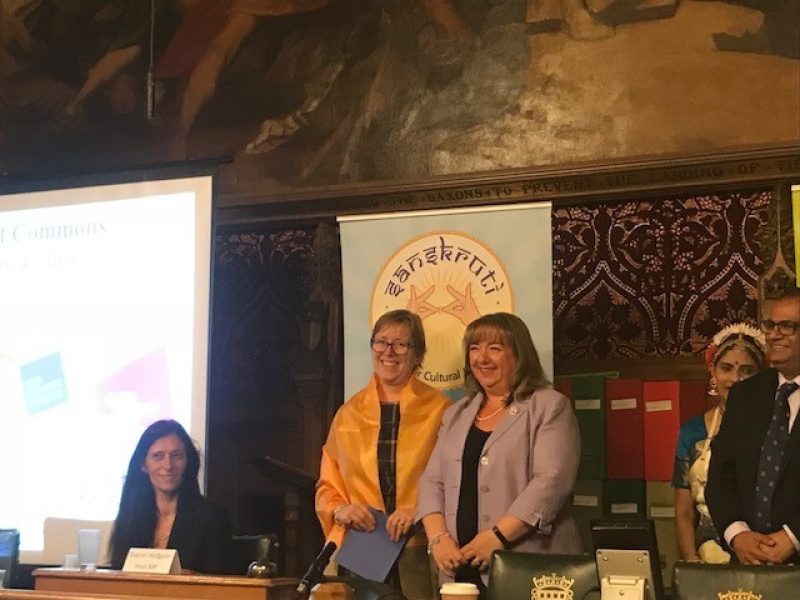 I attended the World Hunger Day event at the House of Commons, organised by the Sanskruti Centre. There were seven fantastic speakers, including The Felix Project’s own Hilary Croft.

The focus of the evening was on child food poverty and hunger.

Sharon Hodgson MP, the host, opened the event with a heartfelt message that highlighted how sad it was that free meals for children was first campaigned for in 1906 by Fred Jowett a Labour MP, and here in 2018 children are still living below the breadline in food poverty.

Ragasudha Vinjamuri, from the Sanskruti Centre, then introduced the speakers.

Emma Lewell Buck MP, Vice Chair, presented the facts; 8.4 million people are hungry in the UK, 3 million children go hungry in the school holidays, malnutrition is costing public services including the NHS dearly. She highlighted that Government policies won’t be changing any time soon so schemes and programmes across the UK, such as Feeding Britain, are crucial if we are to make a difference.

Sophie Noonan, from The Hunger Project was next to speak. The Hunger Project is a global, non-profit, strategic organisation committed to the sustainable end of world hunger by 2030. She commented on the international issue of 800 million people in the world suffering from hunger. She focused in on how the poorest nations are tackling this issue and vied that access is key to helping break the cycle of hunger and malnutrition.

Bhawani Singh Shekhawat, CEO of the Akshaya Patra Foundation, was then introduced. The foundation provide 1.7million meals every morning to children in India. He talked about the importance of speed and scale in tackling the malnutrition and hunger of children in the UK and across the world. His final message was that collaboration was vital, between Government, Local Councils, Food & Beverage industry leaders, charities, not for profits, schools and parents in order to end food poverty and hunger.

Ragashundha Vinjamuri, then performed The Story of “Akshaya Patra” via a traditional Indian Dance. It was wonderful to watch, a fantastic way to portray the story behind the name of this organization.

Hilary Croft, The Felix Project CEO followed this with heartwarming words on the progress of the brilliant Schools Programme and the positive response from the families that are benefiting from food bags that children take home to their families at the end of the day. It was fantastic to hear once again how we as an organisation are making a difference. Hilary commented on how we take one environmental issue, food surplus going to landfill, and use this to help reduce the effects of the systemic problem of food poverty in the UK.

Rosie Oglesby, from Feeding Britain took the microphone to highlight the need for government policy changes in order to tackle the causes of this issue. She made the very valid point that in all households the food budget is usually the most flexible so is often the first to be reduced when in financial hardship. Rosie suggested a number of steps that should be taken including funding for school holiday provisions, welfare reform & measuring food prices.

Barbara Crowther, from Children’s Food Campaign – Sustain, agreed that food prices needed to be considered and that good nutritious food should be more affordable than bad food and touched on the successful campaigning of the Sugary Drinks Tax in the UK. She also stated that local authorities have created successful models that should be taken on and developed further by government policies.

Last but by no means least we heard from Louisa McGeehan, from Children’s Poverty Action Group. An organisation who are working hard on behalf of children in poverty in the UK. Her crucial points were that child poverty is getting worse. To tackle the issue we should bring back measurable government targets and focus energies on creating non-stigmatized access to support.

It was a wonderfully engaging event something I was proud to be a part of. It showed the amazing achievements of organisations across the UK and globally, but clearly highlighted how much more there is to do. I left the event feeling even more motivated to be part of The Felix Project, and grow our work.