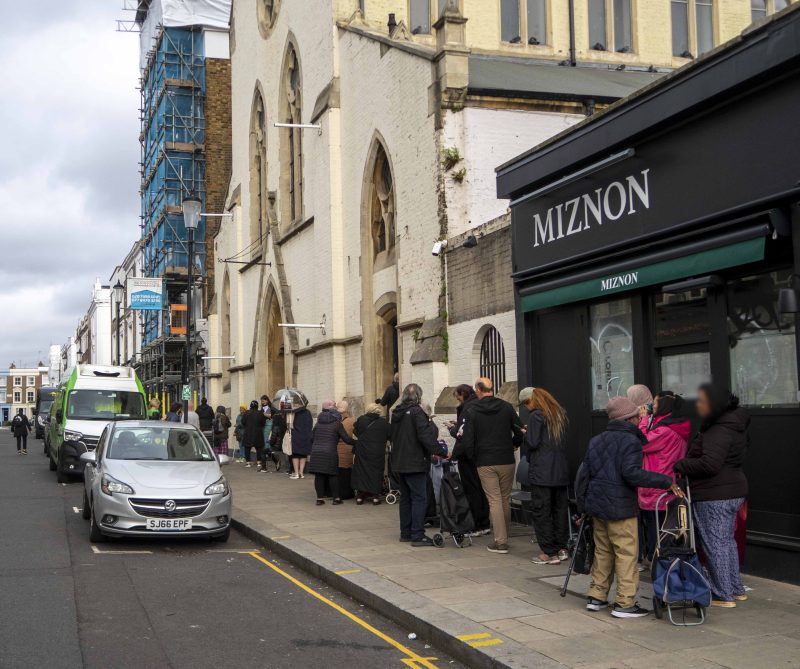 New figures released today by the Trussell Trust reveal that 1.3m emergency food parcels were provided to people between April and September this year by food banks in the charity’s UK network and almost half a million of these went to children. That’s a third more than were provided during the same period in 2021 and an increase of more than 50% compared to pre-pandemic levels.

The Trussell Trust, which supports more than 1,300 food bank centres, says the cost of living emergency has created a ‘tsunami of need’, as people struggle to survive amidst the soaring costs of living.

With need outstripping donations for the first time in its history, the charity has been forced to launch an emergency appeal to ensure that food banks can meet the alarming level of need in their communities.

In the first half of this financial year alone, the Trussell Trust’s food bank network provided more parcels than in a full 12-month period five years ago, when 1.2 million emergency food parcels were distributed. Over the last six months, 320,000 people have been forced to turn to a food bank in the Trussell Trust network for the first time which represents a 40% increase compared to 2021.

The charity warns that food banks are at ‘breaking point’, both physically and mentally, and are set to face the hardest winter yet as they expect to provide more than 7,000 emergency food parcels a day on average in the next six months.

Josie Barlow, food bank manager at Bradford Foodbank said: “Someone who came to the food bank recently told me that ‘buying milk is a luxury now'. So many people are struggling with bills and food prices. We are fortunate to be able to help people and we work hard to support them in both the short and long term, but we are also facing challenges. We have seen a huge increase in people coming to the food bank in the last two months compared to the same period last year and our stock levels are very low for this time of the year.

Furthermore, new research to be released by the charity next year, finds that one in five people referred to a food bank in the Trussell Trust network are in working households. The charity is supporting more and more people who are working but still can’t afford the essentials which is leading to food banks having to change their opening times to make sure working people can pick up their parcels outside of work hours.

The Trussell Trust is calling on the UK government to act decisively in next week’s Budget. Over the last few years, the charity’s network of food banks has seen how the right support, at the right time, can help people out of hardship. Most recently, the government’s targeted support to people on the lowest incomes via July’s Cost of Living Payment correlated with a small dip in need at food banks. However, the charity warns that short-term interventions are neither sustainable for government nor dignified for people who are struggling, and they don’t solve the longer-term problem of people having to rely on food banks.

“These new statistics show that, even in summer months, people are struggling to afford the essentials and we are expecting that this winter will be the hardest yet for food banks and the people they support. This is not right.

“We know that with the right support and a stable and sufficient income, people don’t need to turn to food banks for support. Over the last few years, the government has acted to protect people who are struggling, and this action has had made a difference. They must now act again: with swift support now to help people through the winter, and with vision for the longer-term to ensure that social security is always enough to weather challenging times.

“We are calling for the Prime Minister to act decisively in next week’s budget. We urge the UK government to realise their commitment of supporting people on the lowest income with a broad package of support. As well as ensuring that benefits rise with inflation as soon as possible, this must go further to close the gap between price rises and incomes over the winter.”

“These figures are truly alarming, but sadly unsurprising. This tsunami of need has been building for months as more people struggle to afford the high price of food and energy.

“All the charities we already supply are crying out for more surplus food and we have hundreds more new charities and schools contacting us asking for our help. It is a desperate situation, I have heard heart-breaking stories from foodbanks, who are facing the harsh reality of turning people away because they cannot meet the ever-growing need.

“As we head into winter it is clear more must be done to help those on the lowest incomes and ensure they can afford to feed their families and heat their homes.

“However, while we wait for government to act The Felix Project is here to do what we can, we need help to be able to get more food in and out. That is why we have launched our Empty Plate Emergency Appeal, please donate, and help us fill millions of empty plates this winter."

Just £5 will deliver 22 meals of healthy, nutritious and delicious surplus food to Londoners in need. https://thefelixproject.org/em...